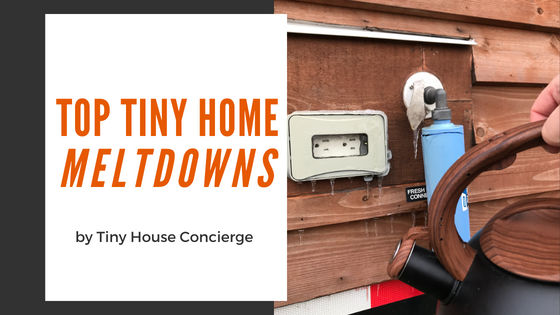 Thanks for joining me once again here on the Tiny House Expedition Blog! Or if you’re new, it’s nice to meet your acquaintance. My name is Alaska, aka The Tiny House Concierge.

I love my tiny house lifestyle, but sometimes things don’t go according to plan. And when that happens, we call what ensues a Tiny House Meltdown.

Today, I’ll be telling you about my biggest Tiny House Meltdowns of all time. But before I do, I just want to say that The Tiny House of Peace is like a newborn baby. I don’t care how many tears are involved, I love it with all my heart, and it can do no wrong. I just occasionally have to rename it, The Tiny House of Less Peace Than Usual.

I’m about to tell you some dark and dramatic tales. But please don’t let what I’m about to say scare you out of going tiny, OK? Promise?

Now, buckle up or grab the popcorn because these stories are not for the faint of heart. You have to be tough to go tiny. I know what you’re thinking, Texas doesn’t have blizzards! And you’d be right, except for that one time that they did.

On my third day of living tiny, I got a call from my sister.

Did you see the news? There’s a blizzard headed for Texas! Make sure the dogs wear their coats! (I should mention I was puppy-sitting my sister’s chihuahuas during this ordeal.)

So I knew about the blizzard, but not nearly soon enough. I was only able to get a tank of propane before the snow began to fall, and after that, my fate was sealed.

When I woke up, my waterline was frozen, my car was snowed in, and I couldn’t flush my traditional toilet. Then Lola, the chihuahua, noticed she was out of dog food, and as she pitched a fit dressed in her tiny down parka, it occurred to me that we were also out of drinking water.

Ten minutes later, I was using a cardboard box as a makeshift shovel to dig out my car. Overnight, Austin, Texas, had become a scene out of a post-apocalyptic movie. Abandoned cars left by fearful drivers sat parked at odd angles in the middle of the street. And thanks to a power outage, Target was running on a generator. Inside, shoppers scurried through the dimly lit box store wearing masks and scrounging for Gatorade because that’s all that was left after everyone woke up with frozen pipes.

I had intermittent power, which meant very little heat and no water. I survived by eating the expired food left by the former tiny house owners (I bought my tiny secondhand), and because the toilet didn’t work, I was forced to borrow Bart and Lola’s wee-wee pads… and then freeze them outside. Washing dishes with snow because I have no water... again

By the end of it, a city water main line had burst, leaving me without running water long after the thaw. I made it seventeen days before I gave up and took the puppies back to Tennessee to stay with my family and figure out a new plan.

My second tiny home parking space was in a backyard in Colorado. I had access to water and power but no sewer.

I’m a big fan of using biodegradable products anyway, so I installed a Separett composting toilet and began digging myself a greywater pit.

Friends, I have to give myself some credit here. I tried so hard to do this right. I asked questions on tiny house forums, consulted with people who had similar systems, and even called a local greywater expert for guidance. But at the end of the day, my greywater pit was an abysmal failure.

The water didn’t drain fast enough, causing bacteria to grow and bringing a stench with it. Mosquitoes started breeding, and because I built the pit too close to my tiny, it softened the ground under one corner, and my house sat tilted for longer than I care to admit. 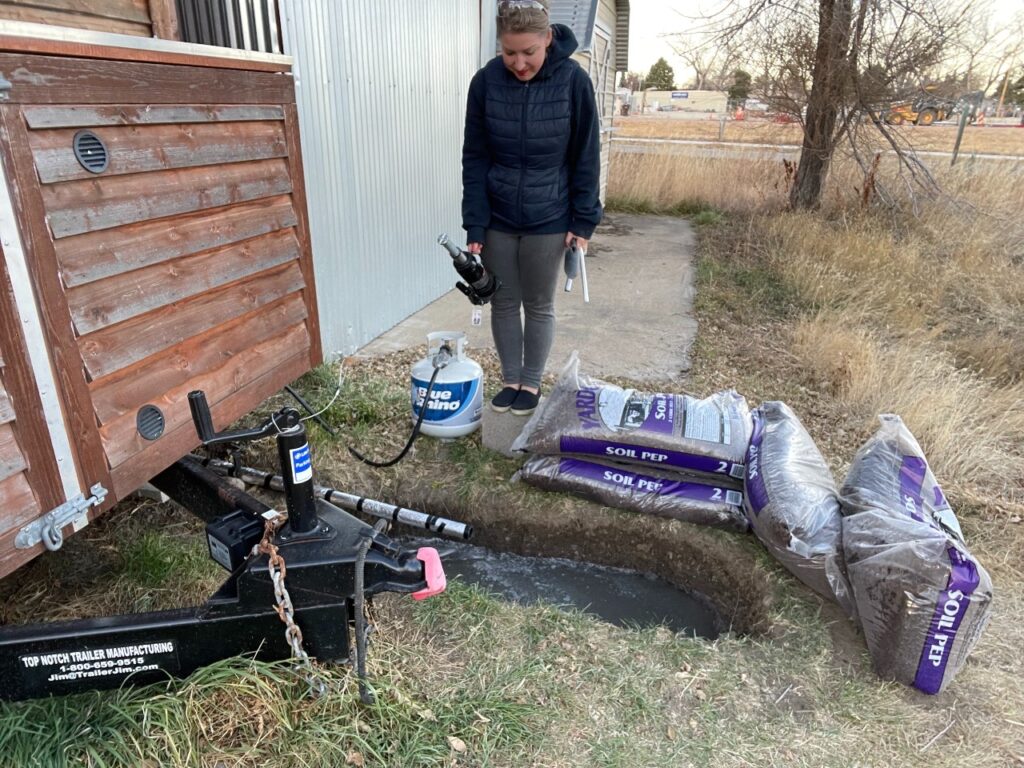 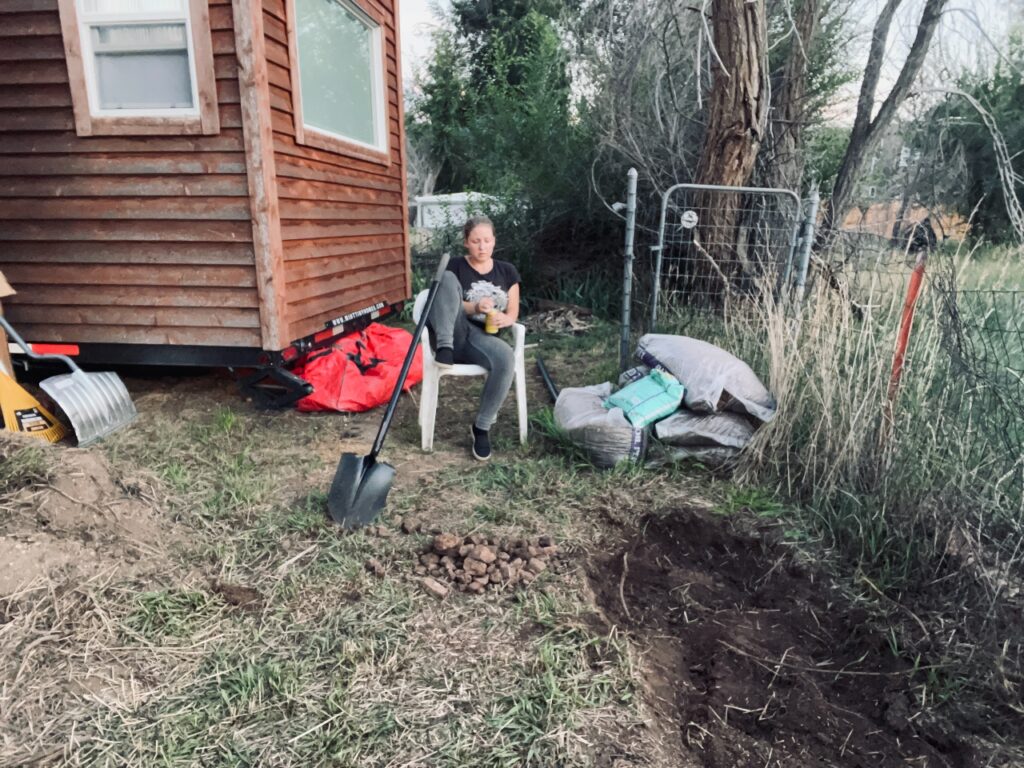 I desperately wanted to create a safe, sustainable way of disposing of greywater, but after two years of fighting with it, I’m ready to admit that I was in over my head. The soil was filled with clay, the frost line was deep, and I couldn’t take a shovel full of dirt without hitting rock.

I’ve been working through it in therapy, but let’s just say that the Tiny House Meltdown(s) caused by my greywater issues will not soon be forgotten.

This is the debacle that ultimately gave birth to my Tiny House Meltdown Series on YouTube. If you are ever having a bad day, go watch it; it will make you feel better.

I was cat-sitting over Christmas for some friends across town. When I left my tiny house, I knew I was running low on propane.

That’s fine, I thought. It’s not like I’m going to be cooking until I get back. (I would be gone for two weeks.)

And it would have been fine, except that my stove wasn’t the problem. Friends, on-demand propane water heaters run an automatic cycle at regular intervals so they don’t freeze and break in cold weather.

As I was rushing around trying to determine what constituted a cat disaster kit, I got a call from my landowner. There is water gushing out of your tiny house!

To make a very long saga short, my water heater broke. And it was nine hundred dollars later before I had a shiny new one.

Which lasted about a week.

Seven(ish) days into using my brand-new water heater, my heated hose crapped out and froze. And when it did, the new heater couldn’t complete the cycle, and that one froze and broke.

And this is the story of how I spent six months without hot water. 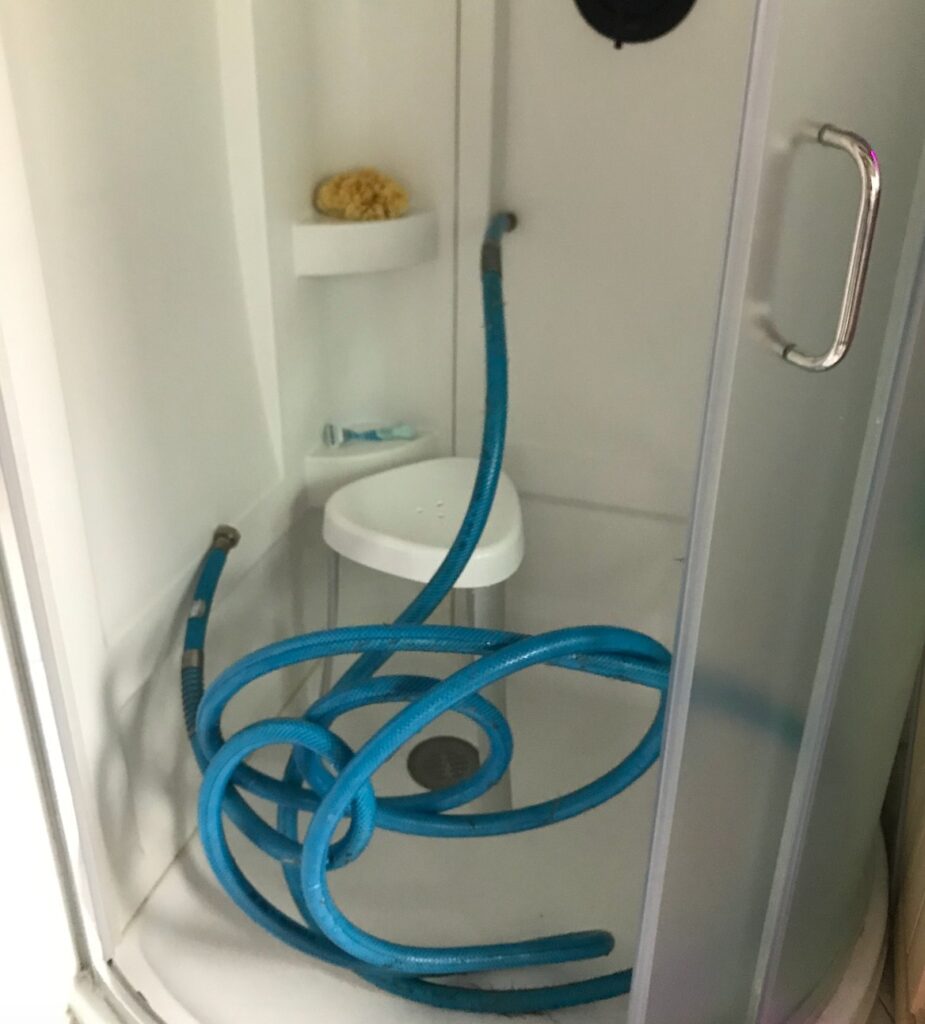 Trying to thaw out my hose 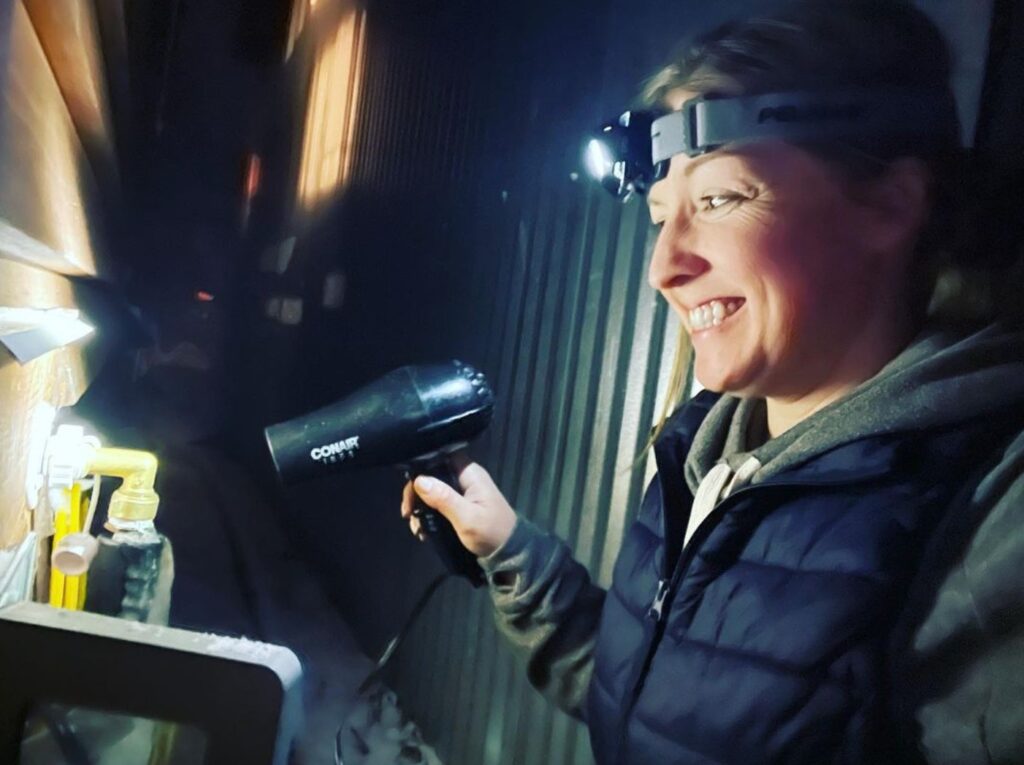 Troubleshooting water issues at night in the dead of winter

This past July, I bought a Rinnai water heater. This is the brand they use for remote cabins in Alaska, so I knew it would be up to the task. It required an addition to be built on my home, but I did it because I was tired of taking showers at my gym, which has the kind of spray nozzles they use in prison.

Anyway, I’m sure the Rinnai holds up great in cold weather, but I can’t say for sure because three days before freezing temps set in, a metal accessory valve cracked in half, and Friends, SO. DID. I.

You might be thinking that this story ends with me overcoming yet another obstacle, but honestly, that valve was the last straw. I have since decided to take my water issues as signs from The Universe that I need to go in a different direction.

So is this a good time to tell you I’m moving to Washington?

I’ve been lured there by Aunt Robin, who promised me mild winters and a sewer connection.

P.S. This is a picture of me with my new pad in Washington. How sexy is that sewer line??!