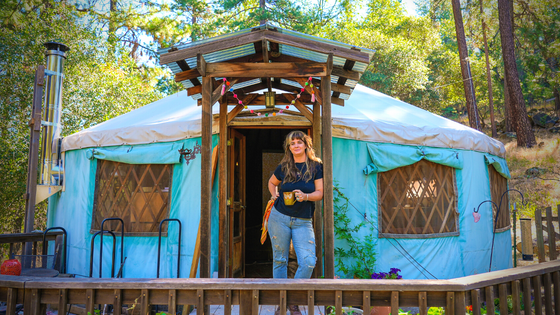 Meet Meghan, a badass micro-farmer who lives on a 10-acre solar-powered yurt homestead. She calls it Yurtlandia— a place to grow, enjoy slow living, and appreciate nature. For her, this is a literal dream come true.

"I'm the third owner of this property. The first owner was actually a woman. So this was a woman-built property. She had two boys here. So she had the two smaller yurts. And they were in a little bit of a different placement.

And then the person that I bought the property from moved their mother-in-law into the yurt. And so they built the second larger yurt, and that had its own living space as well. And then I came along and have now been the third owner of the property. And I'm shifting it to fit my needs and to fit what I want this property to become and be.

I got it for quite a good deal. It went out on the market on Wednesday. I heard about it on Thursday. And like I said, offer on Friday. So I got it for just under 200,000.

And I feel really lucky to have found something like that. I think looking in different ways and different places and spreading your word through the community on what you want, what you're looking for is probably one of the better ways to find that."

Inside Her Yurt Homestead 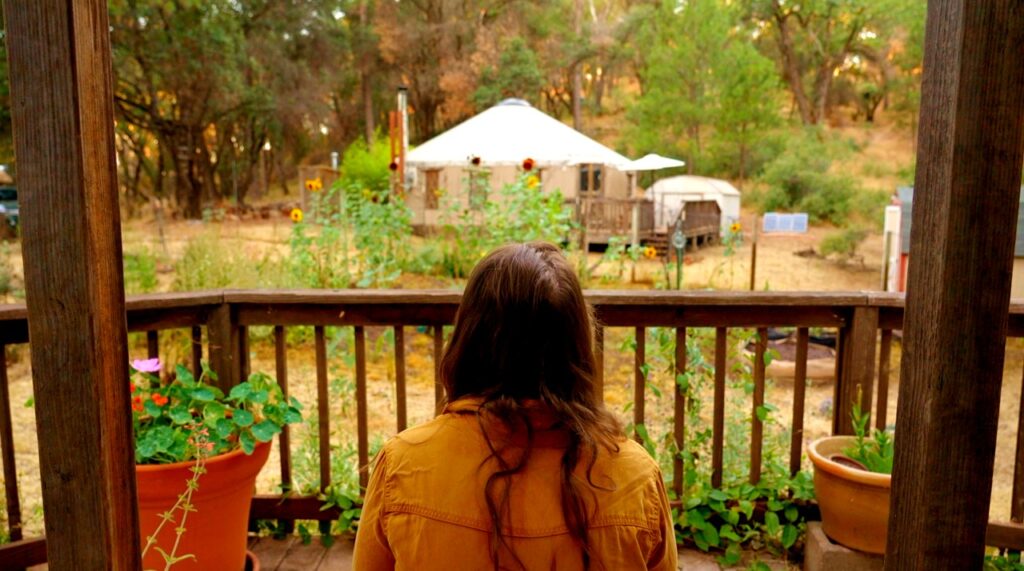 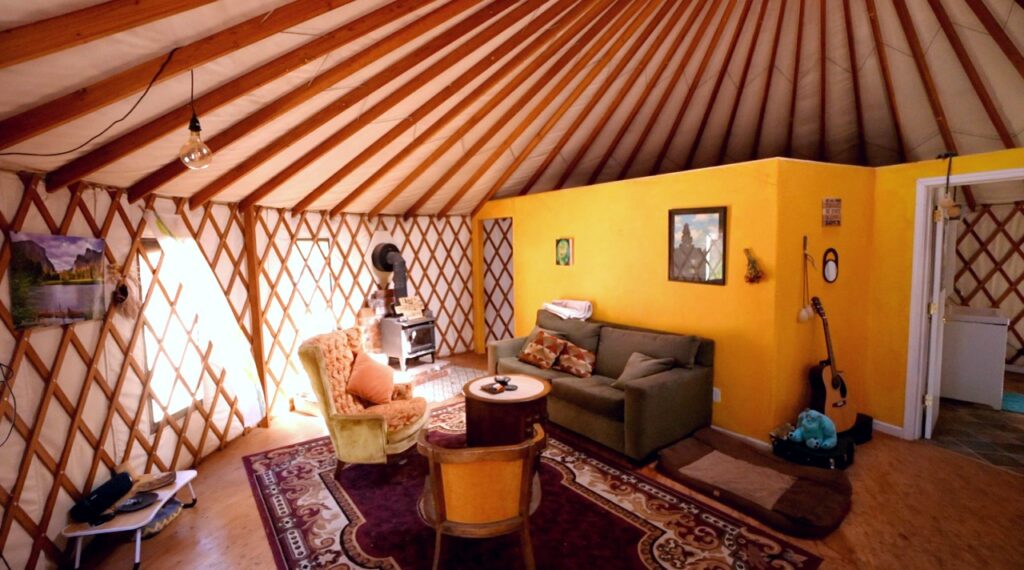 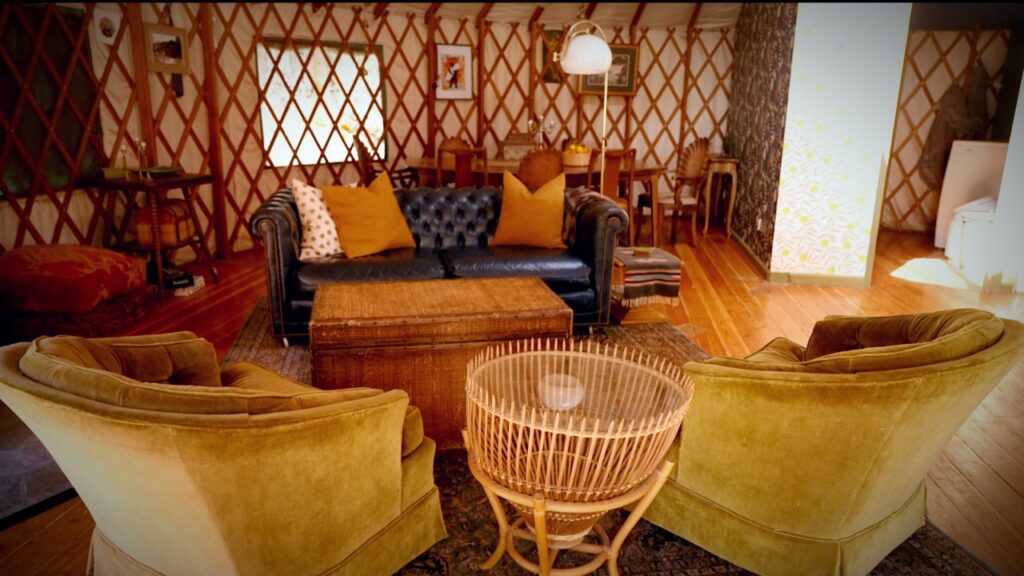 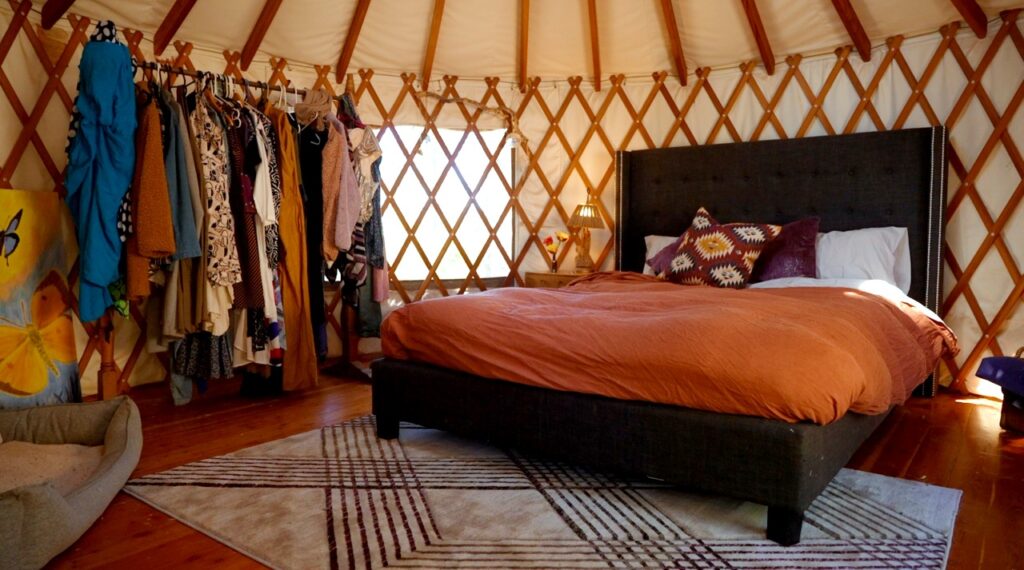 Meghan has been living on her homestead property for almost five years. Her 30-foot yurt home has been here for 20 years. Since then, she added a yurt bedroom, a 16-foot yurt tiny guesthouse, and another long-term yurt home rental. Additionally, she has a robust solar power system, a chicken coop, and a big garden.

In the shed barn, Meghan has the brains of the operation for her 100% off-grid yurt homestead. Inside is the storage for the solar battery storage and a 20-year-old outback inverter. Her L16 lead acid batteries lasted about five years. Importantly, they're more affordable than more modern technology, lithium batteries, but not as efficient. Megahn plans to upgrade them very soon.

The two small yurt homes on the property are both 30 feet in diameter, reaching approximately 700 square feet. Interestingly, their layouts are pretty different, showcasing the various design possibilities of these round dwellings. One is completely open, like a studio apartment. In contrast, the other has an interior wall separating the bedroom and bathroom from the rest of the space.

Meghan wanted her home to also act as a communal space when work-campers come, or future workshop participants come. Because of that, she built a covered deck connecting it to her 16-foot yurt bedroom. It also connects the outhouse and outdoor shower area.

"They are Pacific Yurts. That company is out of Oregon. And all of the parts on this yurt are replaceable. So this one is 20 years old. So I will someday replace the outer canvas so that the windows where they've worn and created a little bit of a draft.

It's all pretty reasonably priced. If I just needed like a window replacement, I could get a window replacement. If I just needed a little part, I could get a new little part. Everything's pretty inexpensive. The 20- foot years, I think, they start baseline of about 18 to 25,000. The smaller yurts are in like the 10,000 to 15,000 range. And you can also pick them up used.

And there are a bunch of smaller yurt companies coming out as more affordable. So there's like a whole wide range of different companies that you could choose from too as well." "Advantages of living in a yurt. Well, you're always super close to nature—you live inside and outside. What I really enjoy about this space is its-- you can create it however you want to do it. You can create however layout that you want to do it. Everything is pretty easy to do as well as inexpensive to do. I've changed the format of my main yurt to accommodate me and to suit me.

So most yurts are built on the platform, and then they just get resurrected. But the actual building itself for the larger ones, they say two to three days. But for like the smaller 16-foot, you literally could put that up in one day. I've contemplated bringing that out to a festival or something like that just for the fun of it." "Some of the challenges that I've encountered as far as the living space itself, in the height of the summer, when it's over 100 degrees, the middle of the day is just like pretty uncomfortable. And I do live 100% off the grid. So that's something to take into consideration. If you were grid-tied, you could probably plug in an AC where I can't. So I kind of have to live within the means of what I have and what I have available to me.

But I would say that the most disadvantage, I always say that there are two weeks in the summer, and there are two weeks in the winter. That, it's pretty hard here. And I would also take that into consideration, like where you are in the world and if it's suitable for you. If it was like a really high snow area, I'm not sure-- quite sure that this style of living would be suited as an alternative living choice.

Other disadvantages I think we're just big learning curves here that I had to learn and overcome. And then, a big skill set that I learned here was chainsawing. And you need that when you live on a gravel dirt road, and you do get a little bit of snow in the winter. I've probably had three or four or five trees fall across the driveway, and that's giving me access out of here. So I had to learn that skill so that I could be confident enough to get out of the property if I need to."

See the full tour of her off-grid yurt homestead above!