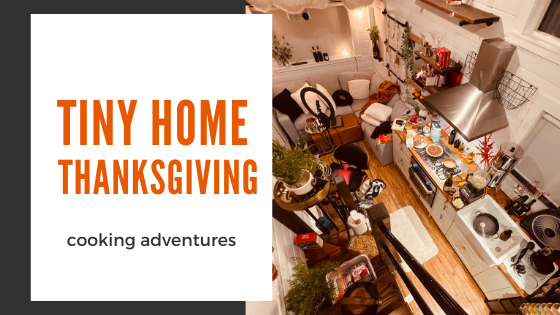 Tiny House Spirals Might Not Be What You Think...

If we haven't had the pleasure of meeting, my name is Alaska, aka The Tiny House Concierge. It's Thanksgiving week, and to celebrate, I embarked on my most elaborate tiny adventure yet: cooking an entire Thanksgiving dinner FROM SCRATCH in a tiny house.

I'll be honest, I had some reservations going into this endeavor. Would it really be possible to cook an entire Thanksgiving meal with all the trimmings in an RV oven? Would there be enough counter space for all the dishes?

Friends, you should know that I decided to go into this without owning a mixing bowl. But anyway, here's how it all went down. I woke to find a rogue can of cranberry sauce in the bed. If you don't live tiny, please do not be alarmed. Technically, there was room in the pantry to store my Thanksgiving stash. However, in my hurry to prepare for a Zoom meeting the day before, I'd chucked the cranberry sauce in the general direction of the loft. Whoops! I promise this was the result of a character flaw and not a space issue!

While I did have some apprehensions about the execution, I have to say that I was pretty proud of my prep work. I'd written down my recipes, organized the ingredients by store, and purchased everything in advance. I'd also cleaned out the fridge in anticipation of leftovers as well as mentally rehearsed The Plan.

The Plan was as follows.

First, I'd prepare the stuffing while baking a pecan pie. Second, I'd pop a Cornish game hen into the stuffing bed.  (Based on my recipe, this would create a stuffing-to-bird ratio of 6-to-1 that I am totally cool with.)  Third, I'd finish by making the sides: green bean casserole, mashed potatoes, gravy, and a frosted, cranberry/Jell-O salad concoction rumored to have been invented by my great Aunt Pat. But first, coffee.

I went to boil water for the French press, and that's when it all came crashing down.  Friends, that's when yours truly discovered she was out of propane. ON THANKSGIVING. It shouldn't have been a big deal.  After all, the gas station is only nine minutes from my house. Just a simple errand, right? Riiiiight. Somehow, this "simple errand" turned into an hour-and-a-half delay. I'll spare you the details, but two gas stations and a faulty propane tank later, I ended up with SOME of the propane I paid for.

Anyway, by the time I had propane, it was time for something more robust than coffee. So, I made myself a very fancy mimosa. I'd had three sips when I realized Thanksgiving-mishap number two: I was supposed to have made the cranberry salad the night before. Jell-O has to set.

I started making it as fast as I could, swigging down mimosas as I went. And that mimosa part is probably why I forgot to make the recipe with port wine.  Instead, I used water and accidentally made actual Jell-O.

For all my prep work, it hadn't occurred to me to buy back-up Jell-O.  This is why on Thanksgiving morning, I found myself walking a mile to the local grocery store.  Why was I walking? Because mimosas- remember? I'm super against driving after drinking (and you should be, too!). Let's stay safe this holiday season, OK?  Anyway, the walk turned out to be longer than expected when I discovered that the local fancy-mart only had Organic Peach Gelatin. I mean, can you imagine?! Aunt Pat would turn over in her grave.  This is why I had to walk to Safeway.

Two hours and five miles later, Tiny House Thanksgiving FROM SCRATCH (™) was back on track.

Well, not 'on-track' exactly. If you've been paying attention to your turkey-timers, you'll know that I was running three-and-a-half hours behind schedule. All I can say is that it was a good thing I wasn't expecting guests.

The good news is this is where the story starts to turn around. I was pleasantly surprised to learn that a food processor is a miracle machine. I'd never worked with one, but in an effort to clean as few things as possible, I used it for grinding giblets, chopping vegetables, and mashing potatoes. It worked extremely well! I'm also happy to report that the stuffing went according to plan, the gravy was decent, and (thanks to the freezer) the cranberry/Jell-O salad was solid by dinnertime.

Oh! Right, I can't forget to tell you about the turkey.  As a single person, I opted for the smaller Cornish game hen over a proper turkey.  I had never attempted to cook a Cornish game hen, but that turned out OK too.  Well, Persephone did try to make a break for it while I was prepping the green bean casserole.  So that happened.  But, she did eventually cooperate and made up for it by being the moistest bird I've ever eaten. Remember when I told you I was worried about counter space? Well, Friends, if you want the real 4-1-1, yeah, stuff ended up on the stairs. I also had a few things perched on top of the washing machine and, (full-disclosure) there was totally a pie on the floor at one point. You know what, though? It wasn't that bad. Actually, seeing the pie on the floor made me realize that I was dedicating 1 / 267th of my house space to pie- a ratio I'm rather pleased with.* I want to promote tiny house transparency, so I will tell you that I set off the smoke detector twice and the carbon monoxide detector once during this experiment. And I guess I should also mention the mini-meltdown I had while trying to make frosting for the cranberry/Jell-O salad with a fork instead of eggbeaters. In retrospect, that was another problem that could have been solved by the food processor. Whoops. Next year.

So, would I do this again? 100%! Even with the hiccups, it was actually a lot easier than I thought it would be. I even briefly considered making the same meal again on actual Thanksgiving. But, instead, I think I'll just have another mimosa and enjoy watching your Tiny House Thanksgivings unfold on Instagram.

I know there will be a lot of moving parts this weekend, but you can do it! I believe in you! If you need tiny house turkey tips to get you started, mine are to clean as you go, consider back-up Jell-O, and remember that food processors are magical. Also, don't be afraid to set the pie on the floor.

Alright, that is the full report! I hope you learned something and that your Tiny House Thanksgivings are everything you want them to be.

Before I go, I want to express gratitude for my fabulous family and their support of my tiny house lifestyle. I'm also grateful to all of you for reading my content and sharing your own stories on social media- it takes a village! Finally, thank you to Tiny House Expedition and all the other pioneers out there who are making this movement happen.  I couldn't be more grateful to have found tiny house magic. Happy Thanksgiving from the Tiny House of Peace.

*OK, OK, you caught me. That pie is clearly from Costco. It's the one thing I didn't make from scratch. I also didn't make the pecan pie crust from scratch because while I am totally cool setting a pie on the floor for a quick minute, I'm totally not cool with rolling out pie dough on the floor.

Alaska is a writer, realtor, and tiny homeowner living in the great state of Colorado.  She is the founder of The Tiny House Concierge, a company that provides education and consultation services for people looking to re-think their housing and re-write their lives.  You can find her on Instagram: @tinyhouseconcierge. Learn the history of the modern movement, get a breakdown of tiny home styles, and meet the passionate tiny community. Also, The Beginner's Guide to Tiny Houses discusses the pros and cons of micro-living―is a tiny house right for you, right now?

Dear Ladies, There is No Tiny House Permission Slip