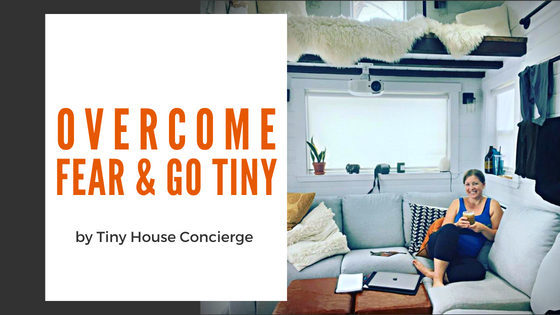 What is Your Life About?

My name is Alaska, aka The Tiny House Concierge, and today I’m going to cut right to it because today’s topic is intense: we’re going to talk about fear.

If you’ve been following my content for a while, you’ll know that before I ended up in a tiny house, I quit my life completely. Like, ended-a-marriage-walked-away-from-a business-quit-a-job-and-moved-to-Alaska, completely. And why did I do it? Because of fear.

I was afraid that if I didn’t dramatically change direction, my one, beautiful life was going to be spent indoors and working for someone else, just so that I could have crappy health insurance, fourteen measly days of vacation per year, and a retirement plan that would *maybe* work out.

But while it’s true that I quit my life and started over in a tiny house, it’s also true that I sat in misery for almost three years before I took action. Why? Again, because of fear. The journal that helps me hold it all together.

Well, with the power invested in me as a Tiny House Concierge, I humbly suggest that we start by feeling it- and then giving it a name.

For some, fear is tightness in the throat. For others, queasiness in the stomach. For me, fear has always felt like an iron weight on my chest, followed by cold dread that seeps into my extremities and ends with a hot flash in my palms.

I know that’s intense, but I think it’s important to be specific. We can’t face fear without calling it out. We have to label it if we’re ever to move through it, and since I haven’t said it yet, yes, the only way out is through.

About a month before I quit my life, it was a mess. I was living on fried food, energy drinks, and alcohol in an attempt to cope. I was either at work or crying about work, and my apartment was trashed. I also gained ten pounds. (All of which was in the face.) It’s not a cute part of my history, but it was during this period that I heard a quote I’ve never forgotten:

Your new life is going to cost you your old one. The year I was thirty-three, I lost a marriage that wasn’t working, a job that made me miserable, and an apartment that was bleeding me dry. But in its place, I gained authentic relationships, a career working for myself, and a tiny home that I owned. And this brings me to my next suggestion.

Once we’ve felt and labeled our fear, it’s time to thank it.

I have a hunch that your fear is very much like mine. And the truth is that all my life, my fear has been trying to keep me safe.

Throughout all those years in customer service, my fear would whisper things like; your writing will never be published because only the one percent make it.

Or sometimes, you’d need to earn 80k/year just to make 3x the rent; you’ll never qualify to own a home.

If I’m honest, there’s a part of me that still wants to loathe my fear. I want to hate it into submission, but after so many years of struggling with it, I no longer think that’s the answer. Because, like I said above, embedded within those insidious whisperings is my soul trying to protect itself the best it knows how.

Don’t share your writing because if people don’t like it, you’ll lose your reason for getting up in the morning.

Don’t dream too high because your ideas could require you to become someone new to achieve them.

I could hate my fear, but it would only fan its flames; thanking it cripples its power. I remember looking at the list when I was finished and having two distinct thoughts:

This is so privileged and indulgent.

But how much would it actually cost?

And this is where the fourth step of working through fear comes into play: one needs to take action anyway.

For me, taking action meant finding a storage unit for my stuff, putting in my notice at work, and calling it off with my partner of almost a decade. Later, it would be Googling “how to write up a tiny house bill of sale.”

I’m not going to say that taking steps isn’t bone-chilling (remember what I said about labeling fear?), but in essence, it’s simple. You apply for financing, sign a contract with a builder, or order the trailer for your DIY tiny house build. And yes, maybe fear will radiate into your palms while you do it, but guess what? When you’ve hung up the phone, put down the pen, or uttered the sentence that changes everything, you’ve already been successful.

Success snuck up on you, didn’t it? I wish I could tell you that on the other side of going tiny, there is no fear, but unfortunately, I can’t. Instead, my old fears have been replaced with shiny new ones to go with the dreams that lie ahead. Fortunately, this time I’m more seasoned with the process.

Take action through the fear.

And so on it goes.

For so many years, I was frozen because I thought I had to wait until I didn’t feel afraid. Now I know fear lives independent of action and that it is not the enemy but a guide. So feel it, call it by its name, thank it, and take action anyway because on the other side of fear could be a tiny house with your name on it. Would I Ever Move Back Into a Regular-Sized House?

Tiny Houses and Mold – Precautions You Can Take