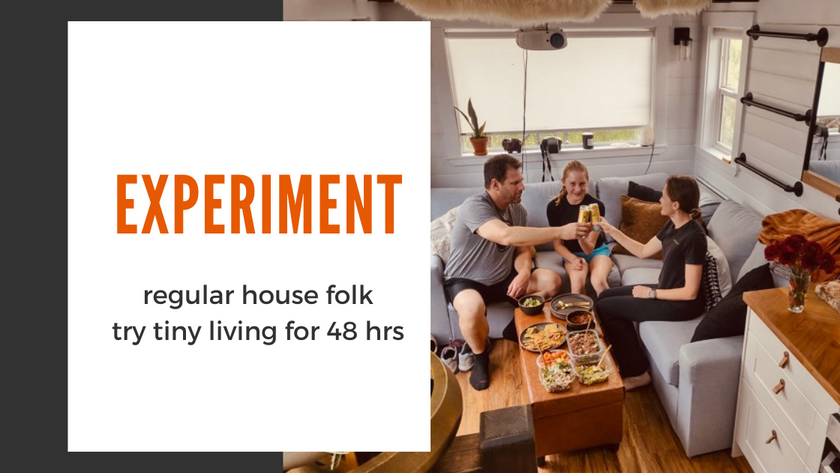 Hello Friends! It’s me, Alaska, AKA your tiny house concierge!

If you follow my series here on the Tiny House Expedition blog, you know I am always conducting tiny house experiments. I just have to know the answer to things like, what happens when you live in 267 square feet and have guests over? Or is it possible to cook a full Thanksgiving meal from scratch in a tiny house?

Lately, I’ve had a new question on my mind: what would happen if I made a family of regular-sizers go tiny for the weekend?

I view life as one giant experiment, and so as soon as the idea came to me, I knew I had to conduct a little me-search. How would regular-sizers adjust to an instant downsize? Would they use the space the same way I do? What things would surprise them? And would they survive the composting toilet?!

There was only one way to get the answers to my questions: find a willing family, and put it all to the test.

This is Dilara, her husband, Noah, and their daughter, Karina. They are the brave family who graciously agreed to downsize by more than 90% for forty-eight hours to tell the internet about it! Here’s how it went down. Dilara at the beginning of her tiny home adventure!

I left the keys with Dilara on Friday afternoon, and after a quick tiny-tutorial, Team Madinger was off! For the next two days, the family would attempt to live their lives, tiny-house-style!

I was dying to know how this experiment would play out. Would they love it? Hate it? Leave early or buy a tiny house of their own?  Forty-eight hours later, I met them at a local coffee shop to get the full download.

This coffee shop is so roomy! These were the first words out of Noah’s mouth post-experiment.

He was joking (kind of), but I had to laugh because I could totally relate! Once you go tiny, regular-sized spaces start to seem huge. The Madinger family normally lives in 2,800 square feet, so downsizing to less than 10% of their usual space and for only forty-eight hours must have amplified this phenomenon!

So how did the Madingers spend their tiny-time? Well, according to the report (and the hilarious docu-footage I received!), they cooked food, took saunas, and moonlighted as tiny house YouTube stars! I still cannot believe they found this glass!

They also left me these cute flowers AND found the beer glass I’d been missing for months! (Seriously, where did you all find that thing??!)

If you haven’t gone tiny yet, you should know that losing things in a tiny home is possible!

I’m glad they had a good time, but I had to ask- did anything surprise them about tiny home living? In a word? Yes. The Madinger family collectively agreed that they were surprised by how much can fit in a tiny house!

They admitted they were not expecting a sauna or a king-sized bed in such a small space. The other thing that surprised them was how diligent one needs to be about putting things away.

I got out the salsa for dinner and realized I could only take things out as I needed them; things also had to be put back right away, Noah tells me.

Yup! I know that one! Tiny houses might clean quickly, but without good tidying habits, chaos will reign supreme.

A tiny house is a good training tool, though, Dilara adds. It makes you more mindful. In a big house, things often stay messy because you don’t have to clean. Young people might struggle with this practice at first, but it will make anyone who lives tiny more diligent.

Fortunately, the Madingers heeded the salsa’s lessons, and here is a picture of their very tidy family dinner. I love this photo because it answers one of my questions- yes, they do use the space the same way I do! I am constantly having the footstools pull double-duty as a coffee table.

I later realized that I forgot to tell them there was an actual dining room table behind the couch. Whoops! Sorry, fam! Oh, well, now they had the real tiny living experience; I don’t bother with the dining room table either!

Actually, in keeping a dining room table that I don’t use, I am breaking a common tiny house rule: own only what you need and what you love. I explained this concept to the Madingers during our interview, and I asked them what they would need to incorporate if they were going to live tiny forever.

Well, food is essential, so I would prioritize cooking space, Dilara tells me. And I like luxury, so I’d want something to take the home to the next level. (Side note, I have to agree with her. This is SO me.)

Noah said he would prioritize a place to store outdoor gear (with an emphasis on shoes) and room for yoga, while Karina insisted that she would need space for kitty friends. And what did the family unanimously agree on? Dedicated areas for technology. The Madingers would not go tiny without proper computer space!

Our interview spurred the discussion of many topics.

The composting toilet (which everyone agreed was easy enough to use!) sparked a conversation about water usage in Colorado- a desert state. We agreed that it’s appalling how much time, money, and water people spend caring for a lawn amidst a water crisis. We also lamented the irony that those who allocate so many resources to lawn care are often so busy at work trying to pay for their lawn that they don’t have time to enjoy it.

Dilara also had some interesting perspectives to share from her Russian heritage.

In Russia, it used to be common for people of all professions to live amongst one another. Doctors, cleaning people, cooks, lawyers, everyone lived near each other and used the same entryway to get into their shared building. Here in the United States, it is not like that. We are all so separated.

We discussed the benefits of diverse communities and the possibility for the tiny home movement to create more diverse- and therefore stronger- social ecosystems. Throughout the entire conversation, I couldn’t help but be grateful for the opportunity to see tiny living with fresh eyes and from so many perspectives. It taught me a lot, from how other cultures see things to how parents think through logistics.

This experiment even taught me a thing or two about my own house!

I learned, for instance, that it is possible to laugh so hard you nearly fall out of the storage loft- so I’ve been warned! I also learned that my giant dinner plates can serve as stability coasters when dining on my footstools. Friends, you have no idea how many cups of coffee I have dumped all over the light gray couch in my tiny living room! I am eternally grateful to Dilara for this tiny tip! 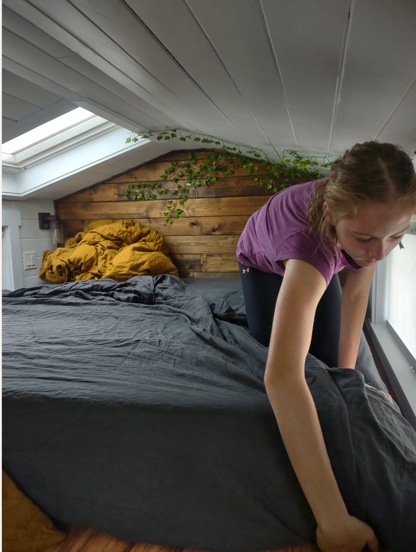 Learning how to make a lofted bed! 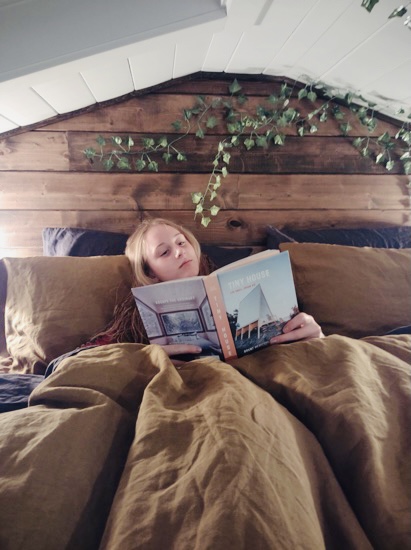 Karina dreaming up her next tiny adventure!

So what was the final verdict? Would the Madinger family ever go tiny?

Well, Dilara seemed to resonate with the mentality of the lifestyle and expressed confidence that her family could make it work in the short term.  Noah mused about the possibility of a dome home, and Karina was sold! In fact, she offered herself up for adoption so she could just move in and become my tiny roommate. Done. Our YouTube channel would slay.

Well, Friends, there you have it! Regular-sizers will survive (and could even enjoy!) a massive weekend downsize. They might even teach you a thing or two about tiny living!

Are you a regular-sizer who’s thinking about going tiny? If so, you can do it! There is no better source to plan your home’s layout than Tiny House Expedition’s YouTube channel.

And if you want information on how to go tiny or to watch lifestyle videos, you can check out The Tiny House Concierge YouTube channel here. Just stick to watching the videos where I’m cute and don’t click on the ones titled Tiny House Meltdown OK? Thanks. Post-experiment - getting the scoop!

Before I go, I want to give a special thank you to the Madinger family for going along with my crazy idea! Can we all give them a collective high-five?

I’ll be back in two weeks with another adventure! But until then, Friends, I wish you well.

Stay fabulous, and I’ll see you next time! Learn the history of the modern movement, get a breakdown of tiny home styles, and meet the passionate tiny community. Also, The Beginner's Guide to Tiny Houses discusses the pros and cons of micro-living―is a tiny house right for you, right now?