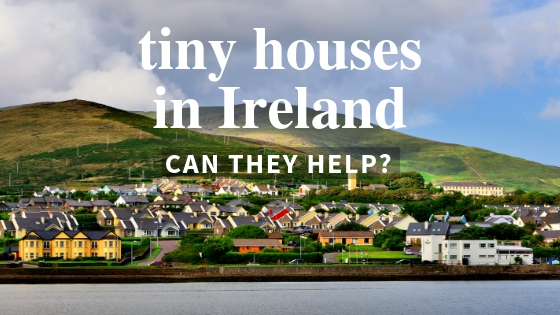 It's no secret that houses are getting more expensive and harder to buy. What's the answer?

It might well be the burgeoning craze for tiny houses around the world, including Ireland. The Naas Municipal District called for a motion to allow the first tiny house project in the area. The next step is for the district to contact the Joint Committee on Housing, which has the final say on whether the district will be allowed to begin a sustainable program for tiny housing.

If it's passed, this motion will allow two things:

While some might consider tiny houses a fancy for the rich and bourgeois, a place to spend the summer, for example, the continued success of tiny houses in other parts of the world disputes this.

North America is using tiny house and micro-shelter developments to help the homeless, as well as provide housing for those who otherwise wouldn't able to afford housing. For example, these models are helping those on a low income, the elderly, students, and first-time buyers.

While it's clearly been shown to work in America, do these ideas translate across the ocean, and how exactly do tiny houses benefit Ireland?

The single most significant benefit to a tiny house is cost.

A tiny house, classified as under 400 square feet (under 39 square meters), is significantly cheaper than the standard cost of living in Ireland. Consequently, it is suitable for many, even those on lower incomes.

As an example, the average price of a three-bedroom house in Dublin currently stands at around €414,500 ($461,442), which is more than triple the cost of the most high-end tiny house. It's also a significant increase year on year, with housing prices having grown by over 14% in just the last year.

Because they are smaller with a lower overall value, the price of home insurance for tiny houses is significantly lower. Home insurance is still vitally important when owning a tiny house.

The insurance premiums' depend if you are living full time in the tiny house of just occasionally. It’s now easy to find the home cover online with the help of insurance comparing sites like www.theaa.ie  after comparing the quote from different companies. It's definitely worth discussing directly with your insurer, as your tiny house will have specific needs.

At first, the size might be considered a major negative, but according to housing statistics, around 10% of the Irish population currently lives in housing with less than one room per occupant.

According to the Housing Agency, the house prices in Ireland are generally unaffordable. The average house is now 3.4 times higher than the annual gross household income. The situation is considered bad enough that the International Monetary Fund will be strictly and continually monitoring the property prices in Ireland.

As housing prices continue to rise, as do rents, the traditional model of buying a house with a large mortgage is becoming untenable. Tiny houses provide a practical option, especially as ADU's.

The Importance of Accessory Dwelling Units

As mentioned earlier, an ADU is a small house located within the bounds of an existing property. They have commonly and historically been used to care for elderly family members, while still providing them with a degree of personal autonomy.

America is again the prime example of this working, especially with Fresno, California passing a bill in 2015 allowing tiny houses to be considered a second home on a property. This bill was passed to help alleviate the issues faced by buyers in the city, rising property prices and a lack of affordable housing; similar to the problems faced in Ireland today.

In Canada, Vancouver provides another success story. ADU's have been a staple part of the housing system for some time and continue to be seen as a valuable part of the infrastructure, with 500 permits issued annually.

The same principles could apply here, with ADU's providing homeowners with multiple options. Building a tiny house on an existing property would allow the owner to either rent it out directly or live in it themselves and rent out their primary residence.

Because of the low cost and short building time, this could very quickly change the face of the housing market. Considering it can take a professional builder as little as 120 hours to build a tiny house, dozens could be built per month, cheaply and efficiently.

However, current prospects aren't as rosy. 1500 rapid build modular houses were announced as far back as 2015, as a measure against rising homelessness. To date, only 20 of these have been built. This shows that currently, the infrastructure available isn't enough to allow us to build tiny houses at scale, at least without significant governmental support.

For example, Housing Minister Eoghan Murphy, TD, approved the development of 70 properties in Dublin over three areas in July 2017, with a total budget of €15.3 million, or over €210,000 per unit.

Ireland currently has almost half a million people aged 18+ still living with their parents due to an inability to afford a home. Not only would tiny houses built as ADU's address this issue, but they would also quickly start paying for themselves.

There is also the sustainability issue to consider. ADU's have multiple benefits when it comes to environmental impact.

Firstly, they can be built in existing properties, in underused backyard areas.

This placement would reduce the slow outgrowth of city boundaries, as well as reducing transportation time and the need to commute, limiting the number of vehicles on the road, as well as CO2 production.

ADU's as an Answer to Homelessness

The recent deaths of several homeless people in Dublin has pushed the issue of homelessness into the public consciousness, but the problem has been sharply growing for the last several years.

Reports by the Central Statistics Office showed the level of homelessness in August 2017 at 7000 people. It is a disturbing figure, especially weighed against the numbers recorded five years previously of 3744, an increase of almost 100%.

Tiny house communities might be the answer, both in short and long term, with examples again coming from the USA.

Reports from the USA's own Department of Housing and Development found that 'tiny homes are a feasible, cost-effective option to house... homeless and marginally housed population.' It was also found that communities based in and around tiny houses have good levels of public support, employment, and contentment.

All of these examples are consistently at full or near full capacity, with some even requiring a waiting list.

A further benefit of tiny housing is the minimal environmental effects, compared to 'traditional' housing.

Tiny houses are consistently lower in energy use, are more energy-efficient and have a far lesser impact on the environment that surrounds them.

Because of the minimal surface area, energy efficiency and heating costs are minimal, with options to heat and power the entire house from solar power. By storing energy in batteries, some tiny homes can remove themselves from the power grid entirely.

The smaller spaces also mean that heating and lighting a tiny house requires almost no energy. This allows tiny homes to be built to close to zero energy standards much easier than a larger property.

Some particularly efficient houses generate more electricity than they require. Talks are currently underway to allow people in this situation to connect to the national grid and export their excess energy directly into the system, for potential profit or tax breaks.

What the Government Could Do

The issue with tiny housing in Ireland currently is one of legislation.

There is a minimum floor area requirement for a house to be considered as a one-bedroom dwelling. It's at 44 square meters (475 square feet), almost 50% above some tiny house designs. Lower this would help tremendously.

Tiny houses could also be defined as ADU's, with pre-drawn, pre-approved housing plans available for purchase directly from local councils.

Implementation of these two steps would quickly change the landscape of Irish housing, allowing tiny houses to provide affordable, economically, and environmentally sustainable housing for all.

Any new legislation needs to be done thoughtfully. Most importantly, a reduction in size should not mean a corresponding decrease in safety or quality.

Tiny houses should not be considered a cure-all to the continued rising of house prices and other issues faced by those looking to buy and rent. But correctly put into place, a tiny housing initiative could be a significant shift in the right direction.

Fear: How to Work Through & Go Tiny Anyway

What Should You Ask a Tiny House Builder?

How Much is ‘Enough?’